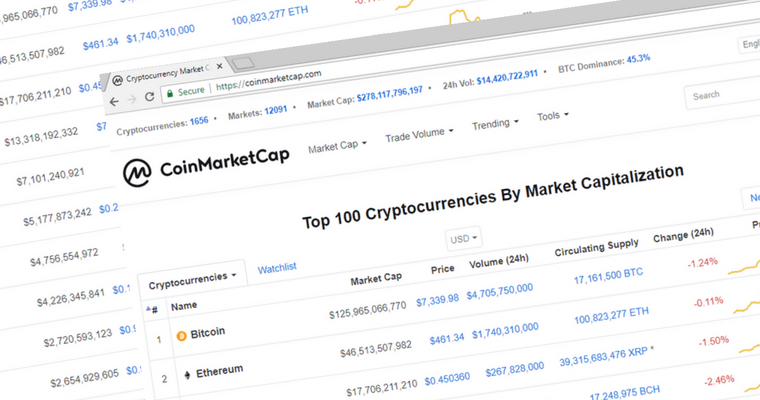 CoinMarketCap is a data aggregation site that has successfully removed requirements for volume exchanges listed on its menu after facing hurdles and criticism in order to show concerns data transparency and clarity.

The platform is considered as a 276th popular website as per the declaration made by Alexa, in an official blog post. This was mainly the response given by the team against the criticism that in order to get listed more easily at the higher rank they have been gaming throughout its statistical algorithms. The removal of volume will make them crystal clear.

The customers have been frequently complaining that it just use low-fee-models in the exchange process, this makes the users excite users to enhance their activities, either bots or annually to have lower per-trade-fees.

The platform has also been alleged of using a questionable method of exchanges just to increase their volume by neglecting the customer’s requirement. Most probably they used to have two methods namely exchange operated market making service and straight up wash trading.

Well, according to the sources it has been stated that the current volume enhancing scheme the so-called “transaction mining”, which also lost its TRP among the number of reputed trading platforms, now is positioned at the 1st place of CMC’s daily volume charts. This model uses its smart strategies by charging the transaction fees and indirectly returning them by registering their own cryptocurrencies to traders.

After suffering through these nightmares CoinMarketCap has made a statement that it will attempt to ‘over provide’ on data and tools so that the individuals can analyze the system and come to a verified conclusion.

“Even though we try our best to verify the data with the exchanges on our site, we are not in the practice of censoring or policing others. In an open ecosystem like the one we are in, we believe the best policy-that we closely follow- is to over-provide on data and let users make their own choices about what to do with that data.”

The above-stated line clearly marks that after giving their level best they are not able to receive positive remarks from the customer’s and hence they decided to leave everything on the users, to testify and decide wilfully.

The new established tools will help the users to view their exchange more than 24 hours as it earlier provided. It will also provide a variety of exchanges that work on a different level of fee models. Again, they stated that their philosophy is very simple.

They just want their users to be satisfied, so they attempted to provide all basics information to them so they don’t stick in any dilemma.

Related Topics:CoinMarketCapCrypto Exchanges
Up Next