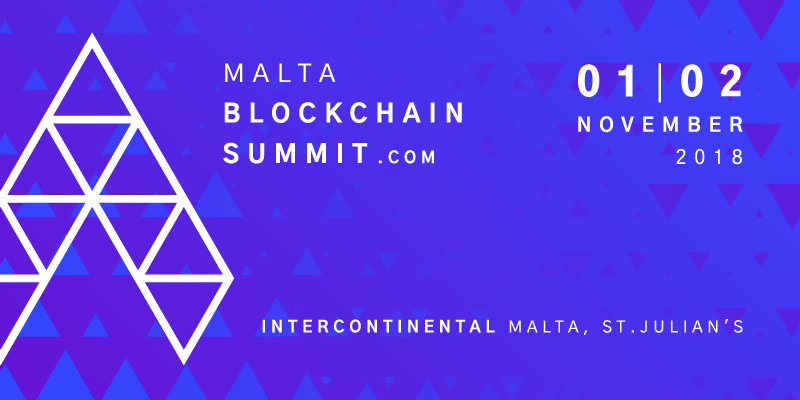 Binance and OKEx – two of the largest cryptocurrency exchanges on the map – continue their operations to relocate to Malta, instantiating the country’s growing reputation as the global Blockchain Island.

More recently, Binance announced its plans to launch a security tokens trading platform in partnership with the Malta Stock Exchange. Clear and decisive moves such as these substantiate the island’s ambitions to lead this budding space into a bright future, making The Malta Blockchain Summit the hottest ticket in town.

The MBS is coming to the InterContinental in November, bringing with it four major conferences, a massive expo floor, a Hackathon, an ICO Pitch, a Blockchain Awards ceremony and a Crypto Cruise – to name a few highlights.

In keeping with the general enthusiasm surrounding the sector, The Malta Blockchain Summit is expected to attract no less than 4000 delegates, 1000 investors, 100 speakers and 300 sponsors and exhibitors from prominent players in blockchain and distributed ledger technology (DLT). Put simply, this summit isn’t just looking to ride the Maltese crypto wave – it aims to amplify it.

Being the first jurisdiction to clearly delineate blockchain regulations, Malta has earned the title of ‘Blockchain Island’. The sunny country is frequently cited on major publications for its ‘avant garde’ and ‘can do’ attitude, which has no doubt aided the transition of Binance, OKEx, and BitPay to the island. The Malta Blockchain Summit, set to take place at the InterContinental on November 1-2, reflects the tidal wave of momentum behind the little island country.

Apart from the four major conferences set to take place, the summit will also include a tech-savvy and buzzing expo floor, a two-day Hackathon, a Blockchain Awards ceremony, an eclectic ICO Pitch – and ends with a suave Crypto Cruise.

“I wish to welcome every blockchain enthusiast to the Malta Blockchain Summit, a melting pot for global influencers in technology, civil society, democracy promotion, and innovation. Expect riveting discussion about the world-changing potential applications of blockchain across multiple verticals, including, but not limited to entertainment, government, banking, payments and fintech, and more,” says Eman Pulis, CEO of the Malta Blockchain Summit.

Broadly speaking, the conferences will cover the field’s regulation and investments, marketing and affiliation, tokenomics and cryptocurrencies, and blockchain for developers. True to the organisers’ proactive tendencies, exhibitors will also enjoy additional value, with a plethora of blockchain developers and affiliates having been invited to the summit free of charge.

Boasting over 5000 delegates, hundreds of investors, 100 speakers and 300 sponsors and exhibitors, the Malta Blockchain Summit promises to be an innovative and momentous opportunity for global influencers to network, forge new connections, and debate the potential applications of blockchain across a myriad of industries such as health, entertainment, government, and banking.

Clearly, Malta is well on its way to becoming the centre for excellence in all-things blockchain and DLT. All things considered, it’s no wonder that media channels like CoinDesk and CoinTelegraph – to name a couple – have picked up and joined in on the island’s bubbling enthusiasm for this next generation, world-altering technology. In fact, the summit sold out on the expo floor plan already in August. With less than a month to go, it’s becoming increasingly evident that the Malta Blockchain Summit is the quintessential ticket for the blockchain, DLT and cryptocurrency community this year.

For sharing in social media, please use these handles

Related Topics:BLOCKCHAINMaltaMalta Blockchain Summit
Up Next