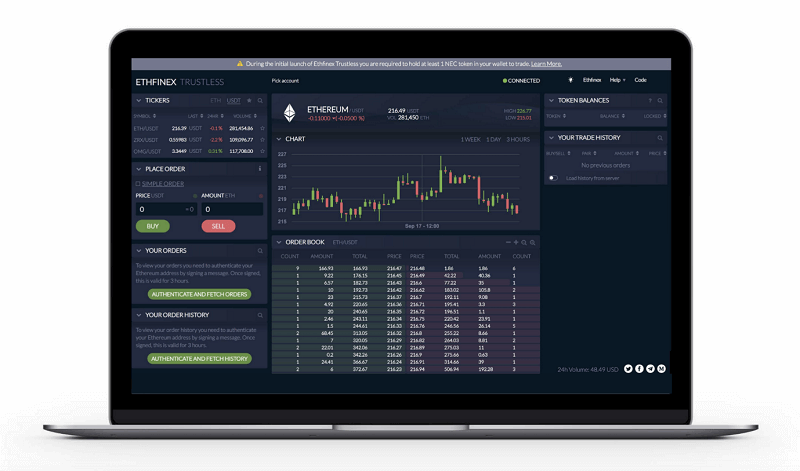 Ethfinex has introduced a high performance decentralized platform for trading. Keeping in mind the hassles of the centralized trading system that still sits at the core of the decentralized blockchain cryptocurrency ecosystem,

Ethfinex, the company that calls its itself the home of digital token and currency trading based on Ethereum, has brought its new trustless and truly decentralized trading system, accurately named “Trustless”.

Ethfinex argues that blockchain was supposed to give back the user full control over their private data and funds and that it aimed to change the world based on this philosophy. But there is still the presence of the gateways, where we have to do the exchanges necessarily.

“The problem is that we must trust them with control of our currencies and personal data — the very things blockchain promised to help us regain control of — and because of this, these exchanges have also gained a disproportionate amount of power.”, Ethfinex states in its official blog.

With Ethfinex Trustless, it promises no registration, no delays in withdrawal and deposits and no loss of the custody of the user’s tokens. Using Bitfinex order book, Ethfinex promises users that they will retain full control over their funds, despite trading with a high-liquid off-chain order book.

It has also promised the user’s for spontaneous trading along with the ability to connect to a centralized exchange system such as Bitfinex.

Ethfinex promises to democratize the decision-making system for the trading platform. During the initial 2 weeks of the roll-out of the platform, the user is expected to hold 1 Nector (NEC) token in their Ethereum wallet to use the platform’s extensive tools. The design will be eventually upgraded to include the currently under review, 0x V2 smart contracts.

Through “Trustless”, Ethfinex aims to return the user their security, privacy, and liquidity in their hand, looking forward to becoming a trustless portal for trading digital assets, and alleviating the concerns with the current system of centralized entities in exchanges.