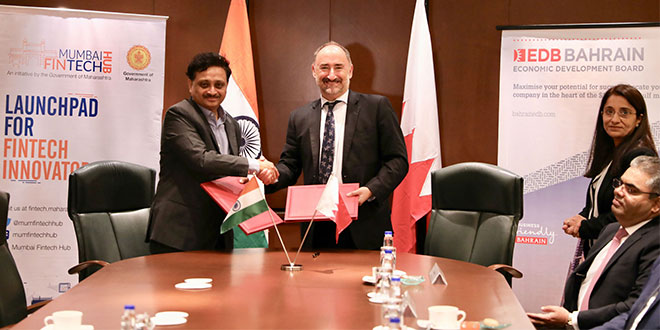 With South Korean government funding 3 blockchain projects to Russian National pension fund putting faith on Blockchain to reduce forgery, we can see the current and most trending tech buzz all around the globe is the Blockchain technology. While we can also see many countries that are supporting and adopting cryptocurrencies as well. One such event happened in India that may open our country to this tech revolution.

According to Economic times, Bahrain’s economic board(EDB) invited Indian Companies to set up their foundation as they are committing to provide, “a plethora of opportunities to Indian fin-tech firms for open banking, the blockchain, crypto-assets, robot-advisory, and remittances”. EDB in Bahrain is a public based agency responsible for attracting companies from all over the world to do business in their countries and in turn attracting the investors too.

Currently, Bahrain has made many tie-ups with the Indian government in many business and economic fields. EDB reportedly has many offices in Mumbai and New Delhi, where they also have been working to improve the conditions of the Indian workers in Bahrain.

In a statement, Senior manager of EDB, Dalal Buhejji mentioned that India is an important market for Bahrain and that their agency has also held a roadshow in Mumbai to attract companies in 2018, December. EDB’s Managing Director, Simon Galpin added further that-

“We are very keen to tap into not only the early stage startups that are coming out of leading Indian cities but also scale-ups. Bahrain is a great test market for companies which want to diversify outside of India.”

In these days we have seen development on the matter of adoption of cryptocurrency in India. The Supreme court of India has given a deadline of 4 weeks to make policies related to Cryptocurrencies. The Union government of India has been seen as quite serious towards understanding and make such regulations associated with cryptocurrencies. While in Bahrain, the Central bank of Bahrain has announced its final statements on activities related to crypto assets as reported by Trade Arabia.

EDB has also paid much stress on the taxation incentives, gateway and further complete access to middle east markets and easy licensing have been made available for the companies. While EDB has also been promising for a healthy environment for the companies to expand their business.

Under the aegis of this MoU, the Government of Maharashtra and the EDB will support each other in promoting the FinTech environment education programmes, delegation visits and through the facilitation of Cooperation between relevant parties such as financial institutions, universities/research institutions, technology experts, and government agencies.

DASH integrated as an input currency in Onepagex as well, late realization but a right move afterall !